WTI crude oil prices for April delivery are trending lower today, threatening to end a four-week winning streak. Prices settled Friday at $38.47, posting an almost two month high as big gains in oil came about due to optimistic sentiment that the market’s bottom has been found. Iran announced that it would not be joining the production freeze deal until it has made up for lost market share, the first piece of news that deepens doubts on the recent upward trajectory. Additionally, the early session saw Iran announce that it would ramp up production to four million barrels per day, nearly 33% above February's output.


Overall, there seems to be a certain bullish optimism creeping back into oil markets as US shale oil producer output continues to fall to near 15-month lows. US oil rig counts also fell for the 12th consecutive week to 386, marking a low not seen since December of 2009. The International Energy Agency said on Friday, March 11th, that prices could start to trend higher as it expects non-OPEC output to fall by 750,000 barrels in 2016; more than its previous estimates of 600,000.


On March 20th, Russia and Saudi Arabia along with Venezuela, Qatar and Nigeria are expected to push ahead with phase II of the oil production freeze deal, though recent trends have seen China increase purchases from Nigeria specifically. Saudi Arabia, which has hitherto taken a firm stance on keeping production at high levels in a bid to squeeze out more expensive producers in US shale and Russian oil got a taste of its own medicine, as the country is starting to struggle with a budget deficit that cannot be ignored. While Iran was thought to have initially agreed to the deal, the country said that it would not freeze production until it made up for its lost market share, casting doubt on the fragile negotiations between other deal constituents as well. Crude oil futures for April delivery (CL-APR16) were seen trading at $37.5 a barrel at the time of writing. 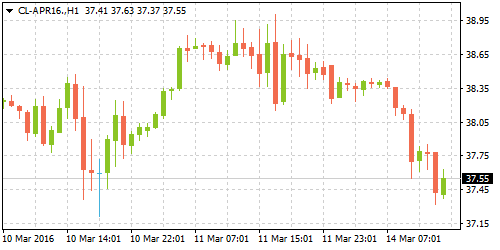