Personal Consumption Expenditure (PCE), which is one of the preferred gauges of inflation used by the Federal Reserve, indicates that inflation in February was subdued. On a monthly basis, core PCE slowed to 0.10%, down from January's 0.30%,  and missing estimates of 0.20%. On a year-over-year basis, the PCE grew at a pace of 1.00%, matching expectations but down from January's 1.30% increase. The US dollar slipped on the news, amid a thin holiday trading session where prices remained flat for most of the day. Personal spending was also soft, rising 0.10% in February, missing forecasts of a 0.20% increase. Personal spending data for the previous month was revised lower from 0.50% to 0.10%.


The PCE report released today highlights the tame inflation which has been a main sticking point for the Federal Reserve. Despite a pickup in wages and the US unemployment rate holding steady at 4.90%, inflation has remained largely weak, running below the Fed's 2.00% target rate. Last Friday, the US fourth quarter revised GDP surprised to the upside with the US economy showing a 1.40% increase, more than estimates of 1.00% in the previous, second revision.


However, despite a strong headline print, corporate profits fell sharply.


Friday's thin trading saw the US dollar being bid up modestly on the data. US Federal Reserve Chair Janet Yellen is due to speak at an event tomorrow which will be the main focus for the markets, considering the hawkish rhetoric from other Fed members last week with some hinting at hiking interest rates as early as April, the chairwoman’s speech is due to give some clarity on where she stands on this issue. 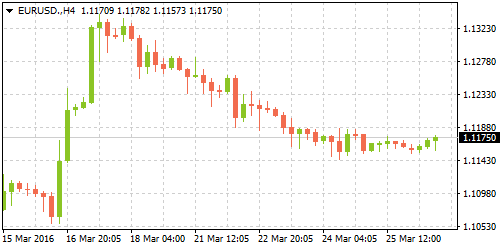