Gold Rising Ahead of FOMC and BoJ Meetings

All Eyes on Fed and BoJ Meetings

The Federal Reserve and the Bank of Japan’s policy decisions will be the key market drive this coming week amid the backdrop of the Brexit volatility. Gold prices rallied strongly ahead of the important week with gold prices retracing nearly half of the declines logged in May.

The markets were largely in a holding pattern last week. Janet Yellen's speech, which was much anticipated by investors offered little hints on the forward guidance for the FOMC meeting this coming week. Speaking at the World Affairs Council of Philadelphia on Tuesday, the Fed Governor sounded broadly optimistic on the outlook of the US economy. More importantly, the Fed chair said that one shouldn't look too closely at a single month's job report. That said, the markets scaled back the odds of a rate hike in June. There was not much of economic data from the US for the remainder of the week.

In Europe, the big news was the ECB's corporate sector purchase program (CSPP). Starting June 8th, the ECB began purchasing corporate sector bonds as part of the policy decision made earlier in March. Looking at the hefty 980 billion corporate debt markets, the ECB is expected to slowly scale up its purchases, estimated to be around 5 billion euro in asset purchases per month. On Thursday, Mario Draghi, speaking at an economic forum in Brussels said that while the central bank was committed to reaching its inflation target, governments needed to come together as well to boost fiscal spending. The euro, which remained largely flat until then started to decline.

In other central bank decisions this week, the RBA left interest rate unchanged on Tuesday, in a widely expected move. The central bank also sounded comfortable leaving things where they are, highlighting the domestic pickup in growth, aptly referencing to the better than expected Q1 GDP numbers released a week ago.

The RBNZ also met over the week on Thursday but left interest rate at 2.25%, in a decision that was too close to call. The RBNZ surprised with its neutral tone in the monetary policy statement and surprisingly did not reference the exchange rate appreciation in the NZ dollar. The Kiwi, surged above $0.71 briefly by Thursday’s close on the RBNZ’s inaction.

On the commodity front, WTI Crude oil futures edged higher this week on continued supply disruptions in Nigeria. Oil prices briefly touched the $51 handle before retreating by Friday's session. Brent Crude oil prices were also seen pulling back after posting a yearly high above $52.50 a barrel. Gold prices continued to follow through from last week with prices briefly testing the $1270 level by Friday. Prices remained flat for the first two days of the week before the bullish rally started on Wednesday which saw gold prices rise 1.52% on the day. 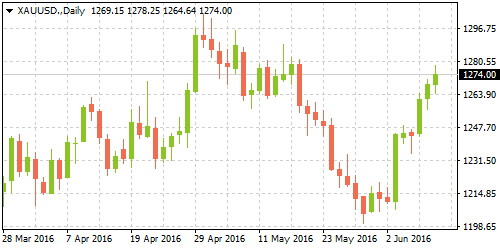 Amid a number of central bank policy meetings this coming week, the FOMC and the Bank of Japan's policy meetings stand out. While the Federal Reserve is expected to hold rates at its meeting on Wednesday, staff economic projections are likely to give new forecasts on the outlook. In the backdrop of the FOMC meeting, consumer inflation numbers are unlikely to garner much attention. Retail sales numbers will of course be looked at closely, considering that retails sales surged strongly last month. Preliminary estimates point to a moderation with the headline retail sales expected to rise 0.40% after rising 1.30% in May, while core retail sales is expected to rise 0.40% on the month.

The Bank of Japan will be meeting on Thursday. Some economists expect the BoJ to cut interest rates by at least 20 bps at its meeting this coming week while others argue that the recent delay of the sales tax hike could see the BoJ holding pat on policy.

Besides the FOMC and BoJ, the Bank of England and the Swiss National bank will be meeting during the week. No major policy decisions are expected to come out from either of the central banks.

On the economic front, the week ahead will see Eurozone, Canada and UK inflation numbers, Australia and UK's employment figures and New Zealand's quarterly GDP data.